There is no questioning the direct correlation between the U.S. economy and the housing market. It was not a coincidence that each took a turn for the worse almost 10 years ago. As one proceeded to decline, the other followed closely behind.

However, the same holds true for positive trends. Recent traction gained by the U.S. housing market is expected to elicit a similar response from the national economy. In fact, experts believe that positive trends in the real estate market are on pace to help the economy recover from a slow first quarter.

New builds are a strong indicator of a recovering market, and Southern California is no exception. San Diego has seen an influx of new building projects break ground. As of this writing, our partners at CT Homes have three new construction projects of their own – each of which can be found on their Homes For Sale page.

Housing starts, in particular, have been attributed to the progressive trends exhibited by both the real estate sector and the economy. Nearly halfway through the year, housing starts have hit their fastest pace since the onset of the Great Recession. 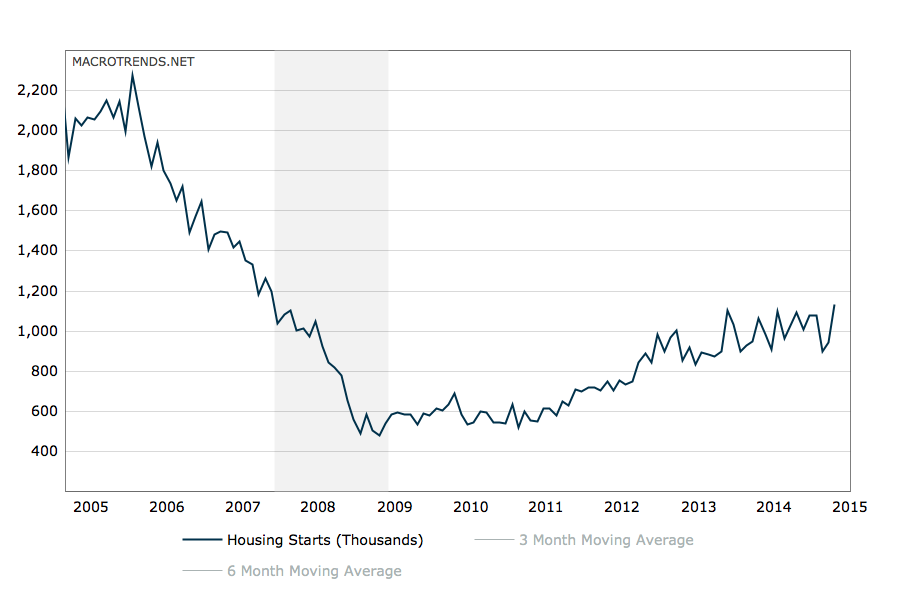 What does this mean for the real estate market?

This development is truly significant, as it suggests a sense of confidence that hasn’t been present for quite some time. It means that housing will have more to contribute in the near future. For what it’s worth, housing will be a “stand-out contributor,” according to Ted Wieseman, an economist at Morgan Stanley.

By the end of the first quarter, numbers presented by the U.S. government identified a 20 percent increase in housing starts. Similar numbers haven’t been seen since 2007. The strengthening economy also saw spending on said starts increase. In April, spending on construction projects increased 2.2 percent to an annual rate of $1.0 trillion, the highest level since November 2008. The jump is largely the result of Millennials favoring new single-family houses and condos.

According to the National Association of Realtors (NAR), “the Millennial generation represented the largest share of recent buyers,” which would explain why builders are targeting younger prospects.

For the second year in a row, Millennials made up the largest pool of buyers. As 32 percent of the buyers in today’s market, those that are 34 years of age or younger have a slight edge over Generation X, whose share of the buyer market was 27 percent. Millennial buyers represented more than double the amount of younger boomer (ages 50-59) and older boomer (60-68) buyers (at 31 percent). It is safe to say that builders would be wise to target the needs of this population.

According to Lawrence Yun, chief economist at the NAR, there is an untapped demand for homeownership that exists among young adults. “Over 80 percent of millennial and Gen X buyers consider their home purchase a good financial investment, and the desire to own a home of their own was the top reason given by millennials for their purchase,” he said. “Fixed monthly payments and the long-term financial stability homeownership can provide are attractive to young adults despite them witnessing the housing downturn and subsequent slow recovery in the early years of their adulthood.”

It wasn’t enough that Millennials graduated from college during one of the worst recessions in American history: they were also subjected to incredibly strict mortgage underwritings, crippling student loan debt and insurmountable down payments. Each of these factors served to sideline an entire population from participating in the housing market. Fortunately, for the sake of the entire housing sector, it appears as if younger populations are ready to purchase a home now. After being neglected for the better part of a decade, Millennials are finally able to actively participate in the housing sector.

The Future of Building

Builders have already heralded the return of Millennials to the housing market, and now they are tailoring their projects to meet the demands of younger generations. With Millennials coming of age and finally having financial backing, their needs and wants will proceed to shape the housing and mortgage landscapes—much as the boomers did before them.

Builders are now more inclined than ever to include the following into their projects:

The increased buying power of Millennials is believed to have a big influence on April’s surging home starts.