The Davenport real estate market in Iowa was one of the hardest hit by the recession and market collapse. Local real estate experienced major setbacks, as the bottom nearly fell out. In the span of only twenty-four months, from 2006 to 2008, median sales prices dropped considerably. Of course, with the expansion of the economy, prices are starting to rise. According to Zillow, the median sales price in the Davenport housing market is $123,000. However, there are signs that the market has not only stabilized, but may be primed for growth. Like the rest of the country, it is dependent on a few changes in the market, but it could easily take off under the right circumstances.

The current average home price for a property in the Davenport real estate market sits at $109,400. The national average, on the other hand, is just under $204,000. While Davenport homes lag behind the national average, they have managed to appreciate a modest 5.5 percent in the last year. Over the past thirty six months, home prices are up 9.7 percent, but are greatly behind the national average of over 28.28 percent. While equity has certainly made a comeback, it still has a lot of ground to make up. That is not to say, however, that Davenport real estate investing and homeowners are not benefiting from the increases.

The market appears to have bottomed out, and the slow march towards recovery has begun. At this point, any gains should be viewed as a positive for the Davenport housing market. The following highlights how much equity has been gained relative to the year of purchase:

While the rest of the country has rebounded at a faster rate, Davenport is making slow and steady strides. Again, any sign of gains in the Davenport housing market should bee seen as a positive.

Davenport is having a tough time righting their ship, as employment is still a concern. The Davenport area lost over 1,300 jobs last year, up slightly from the same time a year ago. The current unemployment rate sits at 5.8 percent, which exceeds the national average of 5.5 percent. With fewer homebuyers confident in their employment, there has been a noticeable lag in sales. Lower demand for homes has played a major factor in declining sales prices. Local job growth is running at a negative of 0.2 percent, as opposed to the national average, which has grown 2.1 percent. Until the economy Davenport shows growth, it will be a while before the housing market fully recovers.

As home prices have declined, Davenport real estate has increasingly become more affordable. Monthly mortgage payments in relation to income, is one of the figures used to represent home affordability. Davenport sits at a number of 5.1 percent, versus a national number of 14.3 percent. This makes Davenport not only historically strong, but one of the most affordable places to live in the country. This also indicates that new foreclosures are not likely to flood the market unless there is a dramatic negative shift with employment.

There is minimal movement as far as home prices in the Davenport real estate market. The only area with a double digit change of sales price average in either direction over the last month was the Eldridge section, with came in at an 11 percent reduction. Another popular area is the Bettendorf section, which saw a 5.2 percent average sales price reduction. The theme for the rest of the market is consistency. Only marginal gains or losses of less than 2 percent in either direction were recorded for the next five most popular zip codes.

With a reduction in inventory, every sale impacts the market. The median sales price in Davenport is currently $123,000. This is a decline of over 3 percent from the previous quarter, and 5 percent from the same time last year. The most critical factor for the Davenport market is the economy. Just like most areas, if the economy is strong, buyers will look to take advantage of low house prices and interest rates. If unemployment remains an issue and job growth is stagnant, people will go to where the jobs are. This could further reduce the average list price and the demand for real estate. There is already a shortage of new construction permits in the area. Without new inventory, the market will get stale and buyers look elsewhere.

Realtors expect weaker price growth in Iowa, and specifically Davenport, over the next twelve months. This is below the national expectation, and more modest than a year ago. There are plenty of things to like about the Davenport market, but until more jobs are created and unemployment turns around, the market will be stuck in neutral. 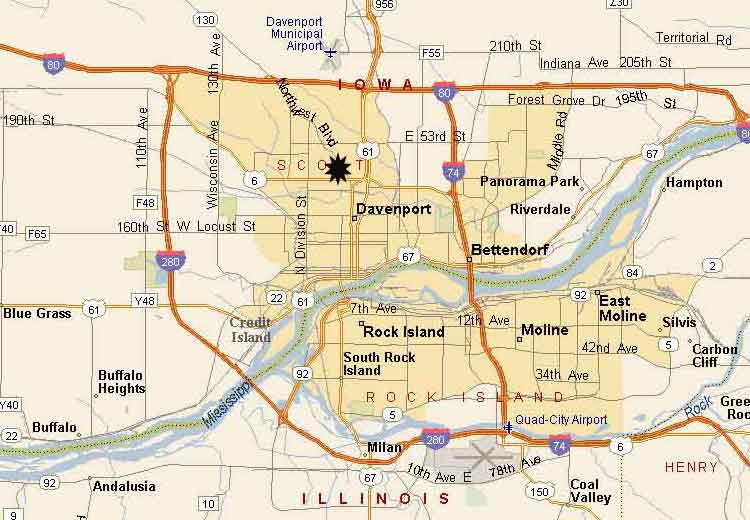