Following the market collapse, Florida was one of the first areas to be hit by the recession. Many parts of the state, including Gainesville, saw record amounts of foreclosures and short sales. Years of built up equity was gone, seemingly overnight. Fast forward some five years later, and the Gainesville housing market has not only stabilized, but there are strong signs that growth is on its way. Steady gains over the last three years have led to strong optimism that the Gainesville real estate market may have finally turned a corner.

It is no exaggeration to say that the Gainesville real estate market may have been among the worst in the country following the collapse. With the exception of Phoenix and Las Vegas, no other areas saw a more severe drop in home values and increase in foreclosures. To say that the road to recovery was long would be an understatement. While the median sales price for the Gainesville housing market is below the national average, there are positive signs. The one year average for appreciation is 6.2 percent. Over the past 36 months, increased values have pulled the Gainesville real estate market out of the depths of the recession. Pending sales are on the rise and more contract signings means things are looking up.

The reasons for optimism in the Gainesville housing market are due to some positive economic and market trends. Employment is one of the drivers in any economy, and Gainesville is strong in this area. Over the last year alone, they have greatly outperformed the national average in terms of employment growth and unemployment. The national unemployment rate is 5.5 percent, with Gainesville coming in around 4.6 percent. With more people working, the greater the chances are that they will come back to the Gainesville housing market. The more people that buy, the higher home prices will go.

The overall economy in Florida has recovered, and is now on par with the national average. In the short term, this is an improvement over last quarter’s data. What is most exciting about the Gainesville real estate market is the number of new housing permits over the past twelve months. This number is nearly 5 percent higher than the rest of the country. This is a sign that builders are no longer running from Florida, and actually see value in this market. On the flip-side construction is down from a year ago, but it appears that the market has definitely hit a bottom and is on the way up.

Gainesville is one of the most affordable places to live in the country. One of the leading indicators for this data comes from monthly mortgage payment to income numbers. The national average is over 15 percent, with Gainesville coming in around 10 percent. This means that buyers view Gainesville as a great place to live, and are comfortable with their monthly payments. This is important because it greatly decreases the chances of another foreclosure boom in the area. Another added bonus is that markets that are affordable have a greater chance at retaining their property value. Affordability is always a factor in area supply and demand. If the demand is high, home prices will rise accordingly.

Foreclosures are still an issue in the Gainesville real estate market, but great improvements have been made. Nearly half of the homes for sale are in some stage of foreclosure. This number is higher than the national average, but actually a steep reduction locally over the past year. Foreclosures are down over 65 percent in the last year and over 13 percent in the last month alone. The backlog of foreclosed homes is still having an impact on the market and may for at least a few more years. This is the main culprit for the reduction of property values below the national level. Major strides are being made, but the foreclosure problem does still exist.

Of course, foreclosures provide great opportunities for the Gainesville real estate investing market. The median sales price of a non-distressed home was $119,250.  The median sales price of a foreclosure home was $75,000, or 37 percent lower than non-distressed home sales. That is a savings of nearly $45,000. Spreads like this are incredibly attractive to Gainesville real estate investing.

With every foreclosure, there is also potential for equity growth. Two areas within the Gainesville real estate market have seen a surge in sales price over the last year. The Hidden Lake section has increased over 33 percent to see an average home price of $145,000. The other big mover was the Westmoreland area, which has risen close to 19 percent, and now has an average price of over $160,000. Both of these areas greatly outpace the rest of the market. On the flip-side, the Highland Court Manor and Rosemont sections both saw double digit reductions in sales. On average, both the list price and sales price for Gainesville are both up from last month. Listings are up over 16 percent and sales price up 4.5 percent.

The number of cash buyers in the Gainesville market is down almost 11 percent from this time last year. This is important to note because this has a subtle effect on the market. Cash buyers, those interested in Gainesville real estate investing, typically buy foreclosed property. With this number down, it can be a sign that more traditional buyers are starting to come back in force. It can also be a sign that there is increased inventory and sales prices are increasing as well.

Gainesville has begun the slow path to market recovery. Compared to the rest of the country, its strides are extraordinary. Located near a major university, Gainesville real estate hangs its hat on affordability and rising sales prices. New housing permits have increased and it looks like the bottom is in the rear view mirror. The future appears to be bright for this market. 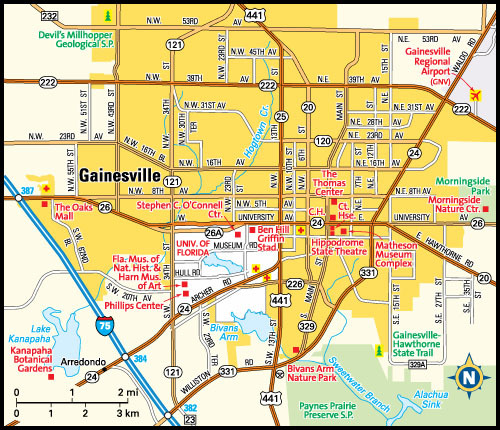