Real Estate Business Mindset: 5 Quotes To Inspire You In The New Year

One of the most important traits a real estate investor can have is the right mindset. A real estate business mindset combines a mentality to never stop learning with a fiery passion to never, ever concede. This intangible component (which is more of an attitude, if anything) is essential to not only succeeding in real estate investing, but personal growth as well.

However, this particular way of thinking is not an inborn characteristic or individually learned behavior. Instead, it’s a muscle that gets stronger with use. Your mindset is the tiny voice in the back of your head that says, “Are you sure you can do it?” It not only controls the way you talk to yourself, but the way you approach a challenge. In return, a real estate business mindset needs to be sharpened on a daily basis, with self-motivation to fuel the fire.

With last call approaching for 2016, now is a better time than ever to get inspired. Stimulating your real estate mindset before entering the new year will help to not only boost your morale, but also revitalize your motivation moving forward. Here are a few of the best real estate business mindset quotes to inspire you in 2017:

5 Real Estate Business Mindset Quotes To Inspire You In 2017 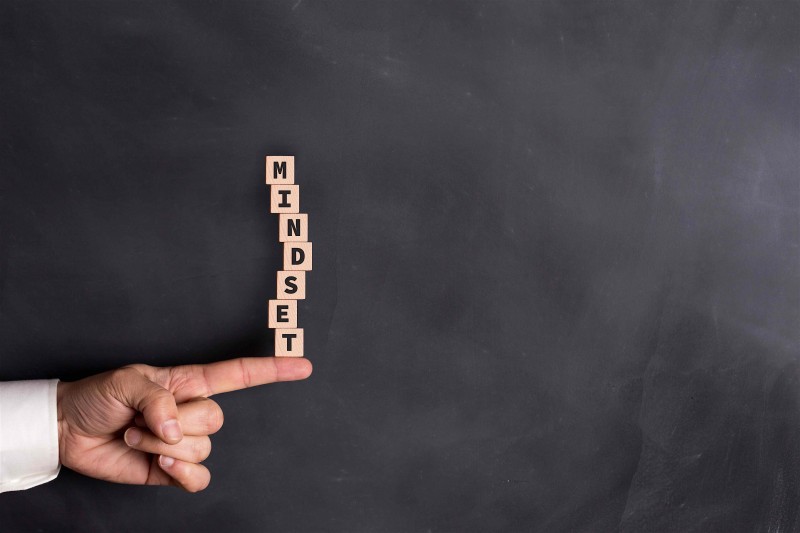 1. “The way to get started is to quit talking and begin doing.” — Walt Disney

This quote speaks directly to those fiddling with the idea of becoming a real estate investor. Although not an easy road, by any means, real estate investing can provide a wealth of benefits for those who get off the fence and into action. Nothing is ever easy, especially those things worth having; however, the only way to find out is to finally commit yourself and get started.

Walt Disney built an empire with this type of thinking — and so can you. The first step is to simply go out and do it. Rather than talking the talk, get out and walk the walk.

2. “I’m a great believer in luck, and I find the harder I work, the more I have of it.” – Thomas Jefferson

As the third president of the United States and one of America’s founding fathers, including the principle author of the Declaration of Independence, Thomas Jefferson explains that luck doesn’t exist, but is rather the result of hard work. Success in real estate won’t appear out of thin air or knock on your door; it takes the combination of a positive attitude, passion and diligence to achieve your dreams.

As an investor, it’s going to take an immense amount of time, energy and effort to build your business until you reach your goals. Having a strong real estate business mindset will help to keep investors on the right track mentally.

3. “Failure isn’t fatal, but failure to change might be.” — John Wooden

John Wooden is one of the winningest coaches in college sports. But the life lessons he taught continue to live on in sports and business alike. Known colloquially as a “Woodenism,” this quote relates to the idea that people associate failure with the worst thing that can happen to them. In reality, failure to change your approach, habits, thought process or actions is the real killer.

Mistakes are an integral part of achieving success. Remember, it’s not how many times you get knocked down, but whether or not you get back up. For investors, especially those just beginning, it’s important to keep going. Setbacks and failures are inevitable, but this “Woodenism” is helpful for those looking to strengthen their entrepreneur mindset moving forward.

The feasibility of becoming a successful real estate investor will differ for everyone. For some, the concept may seem absolutely impossible, as having multiple investment properties and money in the bank is far from attainable. This quote from Muhammad Ali, one of the most significant and celebrated sports figures of the 20th century, begs to differ.

The idea of what is possible (and what isn’t) is up to the person making the decision. Like Ali said, it’s an opinion. Impossible is a person’s own fabrication, which makes it easier to chalk it up as impossible, rather than following through. As an investor, don’t live in fear of the difficult challenges in real estate or stay away from taking big risks. Remember that nobody reaches their goals by giving up hope and neither should you.

5. “We all have great inner power. The power is self-faith. There’s really an attitude to winning. You have to see yourself winning before you win. And you have to be hungry. You have to want to conquer.” — Arnold Schwarzenegger

After arriving to America in 1968 with little money and barely able to speak the language, Arnold Schwarzenegger has achieved more than anyone thought possible. Not only did Schwarzenegger go on to win the Mr. Olympia title at age 23 — a mere two years after coming to the U.S. — but also became a famed actor and politician. Like most people, he faced innumerable obstacles in his life. The way he responded, however, has produce impossible results.

The nucleus of a real estate business mindset is the belief in yourself. It’s an entity that needs to be fed, nurtured and stimulated on a continual basis. If you’re going to achieve success in real estate, you need to have the ability to believe in both yourself and what you’re doing. That inner faith exist in all of us, but it takes a certain level of attitude and perseverance to bring it out.