The Riverside real estate market served as a cautionary tale for over expansion during the last recession. However, it appears as if the area has turned a corner. Thanks, largely in part, to its close proximity to heavily trafficked ports, Riverside has emerged as the hub of Southern California distribution. An influx of commercial warehouses has stimulated the economy and increased consumer confidence. These factors, combined with a lower cost of living than its surrounding areas, make the Riverside real estate market a promising prospect for future growth. For all intents and purposes, the area is in a prime position to excel.

The Southern California housing market is incredibly hot right now, and the city of Riverside is no exception. Over the course of three years, homes in the city of Riverside have appreciated by as much as 61.2 percent, or more than twice the amount of the national average. Of course, price increases have begun to temper in the last year, like the rest of the country, but Riverside homes are still priced well above the national average. The current median home price in the Riverside real estate market is $281,000, whereas the average across the country is just over $200,000.

[ Need money to invest in real estate? Attend a FREE real estate class in your area to learn how to fund real estate deals with little to no money of your own. ]

Appreciation rates have made the Riverside housing market attractive on more than one level. For starters, Riverside real estate investing has taken off in the face of growing equity. Secondly, homeowners are more inclined to sell and stimulate the market when prices are higher. Equity has certainly played a big part of shaping this market. The following highlights how much equity has been gained in the Riverside real estate market relative to the year of the home’s purchase:

Located within close proximity to two of California’s most prominent housing markets, Los Angeles and San Diego, there is no denying that Riverside has benefited from its location. Otherwise known as the Inland Empire, Riverside resides in an area brimming with industrial activity. The ports of Los Angeles and Long Beach are busy because of the recent industrial developments taking place in Riverside. Major corporations are building warehouses just to accommodate the expected growth. Perhaps even more impressively, the areas commercial vacancy rate is a miniscule 3.7 percent. That is very impressive, considering that tens of millions of square feet of warehouse space has been built since 2011.

With more companies opening up shop in Riverside, local employment growth is incredibly strong, and should be for quite some time. The area’s 1-year job growth rate reached 4.2 percent as recently as last quarter, and is now exactly two times more than the national average. For the time being, unemployment is relatively high (6.5%), but with the transition of companies like Georgia Pacific moving to the area, unemployment is expected to drop.

The strengthening economy within the Riverside real estate market has helped reduce foreclosures in the first half of this year by half. That says a lot, considering Riverside had one of the largest ratios of foreclosures in the country. During the period between January 1 and June 30, 5,375 mortgage default notices, auction sale notices and bank repossessions were recorded in the area. That was 33 percent less than in the last six months of 2014. These homes, however, remain very attractive to the Riverside real estate investing community. According to RealtyTrac, distressed properties in the Riverside housing market sell for about 14 percent less than non-distressed homes. That is a savings of nearly $40,000. Savvy investors should be able to find ample opportunities to increase their bottom line. With the economy in a better position, pre-foreclosures took a noticeable dive. They are now 27.5 percent lower than they were last year, and represent 42.3 percent of today’s distressed market.

According to the National Association of Realtors (NAR), Riverside homeowners spend about 17.6 percent of their income on monthly mortgage payments. While that number is high compared to the national average (14.3%), it is relatively cheap for the area. Considering it is within a short distance of both San Diego and Los Angeles, Riverside’s affordability is historically strong and showing signs of improvement.

While the Riverside real estate market is far from perfect, it has a lot working in its favor. In particular, the local economy should serve to bolster the area for the foreseeable future. The stimulation provided by these large warehouses would undoubtedly help drive the housing market.

“The huge population in Southern California drives a lot of growth, a lot of cargo remains here, so the Inland Empire is a major distribution hub,” said Philip Lombardo, executive vice president and managing broker at the Inland Empire branch of Cushman & Wakefield. “The market is hitting on all its cylinders.”

Again, the Riverside real estate market owes its recent success to the influx of new commercial warehouses. However, now that the city has gathered momentum, it is looking to put the recession in the rear-view mirror. 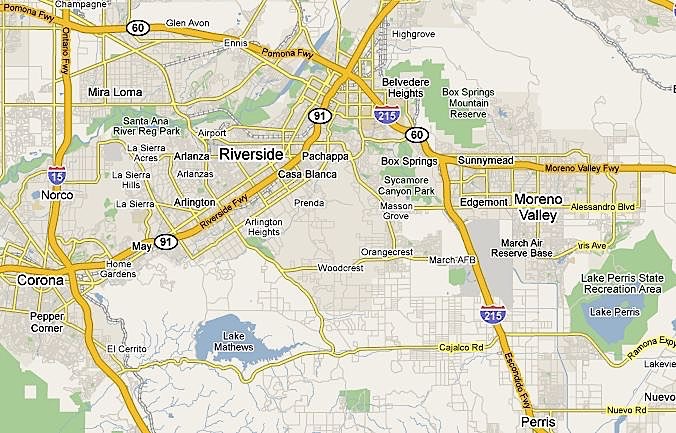