You’ve probably heard people talking about Bull Markets and Bear Markets casually, even if you aren’t someone who works in finance. After all, the Bull statue on Wall Street, along with a lot of popular media, have made the phrases pretty well known.

There’s just one problem. People casually talking about bull and bear markets often don’t realize that particular markers tell you when each of those things is happening.

Instead of watching for simple trends, it’s important to understand bull and bear markets as the complex things they are, and learning how to act when you’re in a different kind of market is key to building a solid investment strategy.

So, let’s talk about bull vs. bear markets, what makes them different, and what that means for you.

What Is A Bull Market?

When investment prices consistently go up for an extended period, that’s one of the best indicators that you’re in a bull market.

It’s important to know that you can still have declining prices in a specific sector or a few key stocks in a bull market. Investment prices being on the upswing, in general, is all this refers to. Individual investments will still have up and down swings due to normal market function in a bull market.

Bull markets are also marked by low rates of unemployment and healthy and growing economies.

The United States historically tends to be in a Bull market more often than a Bear market, and bull markets also tend to last longer.

However, markets are like gravity in at least one key respect. What goes up must, eventually, come down. 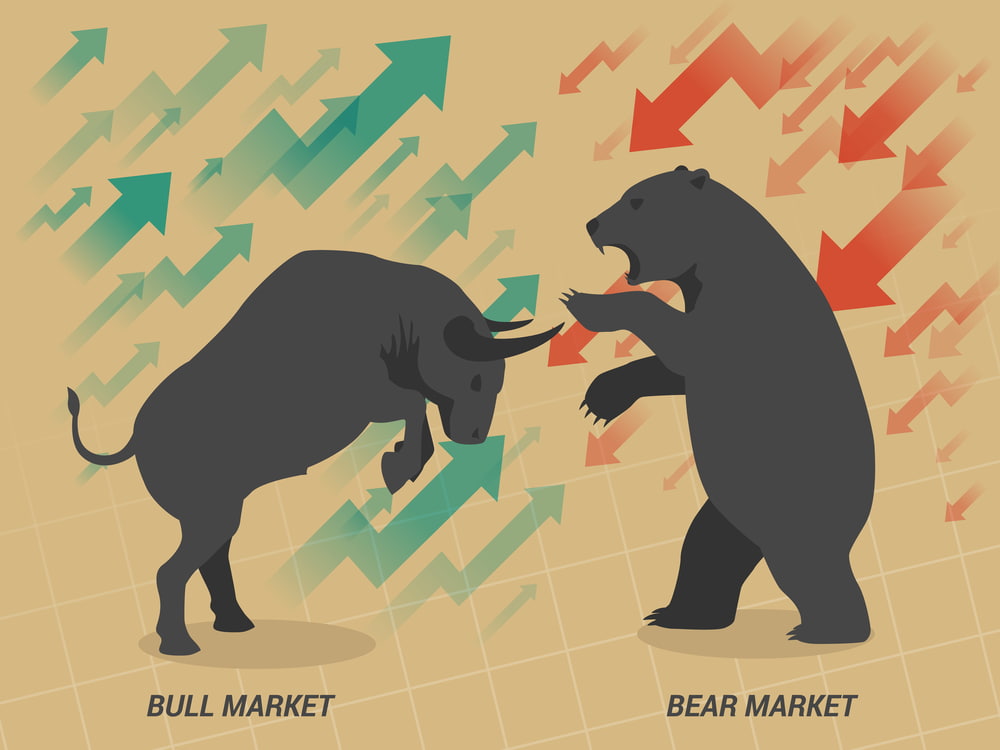 The markets officially turn bearish when stock prices fall 20% or more on average for a sustained period.

Again, it’s important to note that there needs to be some duration before you’re looking at a bear market. A couple of hours of low prices, or even a day or two, isn’t enough to say that the markets turned bear. Instead, look for sustained low prices, consistently dropping prices, and low investor confidence.

Those conditions should persist for at least a week before you think the markets are moving into an actual bear market.

That said, some bear markets only last a few weeks before correcting. Other times, bear markets can last months and even years.

Investors need to understand that bearish and bullish markets are only two types of market performance and that both terms look at overall trends rather than individual stocks or investment assets.

Normal fluctuations in the market might not be a sign of either a bull or a bear market.

For instance, dips in tech stock performance are relatively common when major tech companies underperform expectations or even when Elon Musk and other influential people start talking about the markets online.

Those day-to-day changes don’t necessarily represent a bear market so long as the dips aren’t too significant or too sustained.

Here are some key differences between bear and bull markets that can help you decide when market trends are really to blame for stock movement.

Stock market performance is one of the most apparent differences between bull markets and bear markets. Usually, it’s what people are talking about exclusively when they say we have a bull market or a bear market.

That’s a little simplistic – There are other differences in financial performance between bear and bull markets, but still, it’s an excellent first barometer.

In a bear market, stock prices take a 20% or greater decrease in prices, and the prices don’t immediately rebound. Typically, prices need to stay low for a week or more for a true bear market.

Bull markets, on the other hand, are marked by increasing prices. There isn’t a set percentage prices have to increase, or an amount of time they need to increase throughout. You’re just looking for a general trend pointing up.

The markets can also be flat, in neither a bear nor a bull market, but those steady periods are usually short-lived and often come during transitions from bear markets to bull markets.

Gross Domestic Product, or GDP, is often used to measure economic health and performance. Declining GDP can be one sign that the markets may move into a bear market soon, or it might not mean much other than a temporary lag in productivity or changes in legislation.

However, the overall trend in a nation’s GDP can also indicate whether it will likely have bull or bear markets soon. Some trends happen during bear and bull markets.

For instance, in a bull market, GDP will usually increase or remain steady. However, during bear markets, especially bear markets combined with high unemployment rates, GDP tends to go down.

Securities are another good marker of market trends.

During a bull market, supply of securities is typically strong, but demand is low.

However, during bear markets, that trend may reverse; with investors more interested in buying securities, supply may dip below high demands.

Investor behavior and psychology are some of the most important differences – and a lack of investor confidence can cause crashes and bear markets, even when economic factors otherwise look good.

Typically a strong bull market is marked by confident investors that are less risk averse and more willing to take chancy trades.

Bear markets, on the other hand, usually see low investor confidence, lower trading activity, and more risk-averse behaviors, with one major exception. Investors may be more willing to short sell during bear markets, despite the normally high risk associated with shorting.

Increases in shorts can indicate falling investor confidence and a belief that stock prices will begin decreasing soon.

Bear markets are often marked by decreased buying activity in the wider economy. Economic participation may decrease, particularly in luxury markets, travel, and other conveniences that people can do without if they have to.

Usually, spending won’t change as much for necessities like groceries and gas. Still, economic slowdowns can happen there too if unemployment is too high or if people generally are afraid of a recession coming along with the bear market.

However, it’s important to note that some dips and surges in unemployment can happen unrelated to what the stock market is doing. Temporarily high unemployment doesn’t necessarily mean a bear market is coming, so long as economic activity remains strong and unemployment rates start going back down relatively quickly.

Some inflation is normal during bull markets, but inflation can happen during bear markets as well. 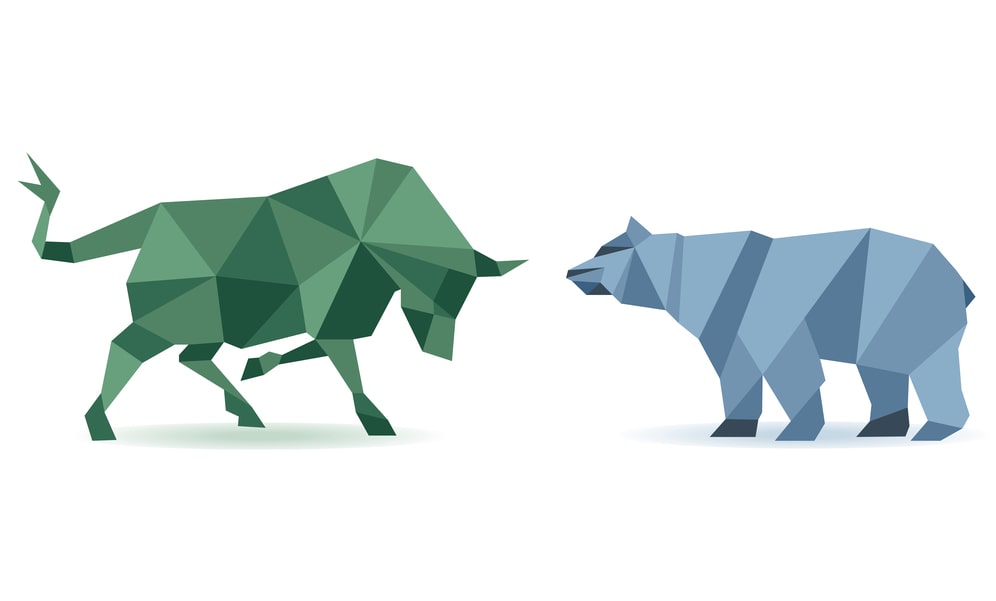 The key when evaluating market changes is to pay attention to the duration of the change and to see if any straightforward explanations might make a short-term difference in market behavior.

For instance, you might see a temporary stock market downturn if a major corporation just released a quarterly statement showing that it performed worse than expected during the previous quarter. But as long as other market trends are normal, that’s not necessarily cause for concern.

Similarly, travel may be more likely to decrease during certain times of the year, but that’s not necessarily a sign of weak economic participation as long as other sectors perform as expected.

In addition to considering outside reasons for performance changes, you should watch for trends changing together or in opposition. Low economic participation and high unemployment are more concerning together than they are individually, for instance.

How To Invest In A Bull Vs. Bear Market

The first thing to consider is how and why you’re investing.

Instead, you can count on upward market trends and leave investments alone.

However, bull and bear markets require different strategies if you’re a day trader or need your investment money within the next few years.

For instance, in bull markets, it’s a good idea to have a high percentage of growth investments, or stocks that are likely to gain value quickly, to capitalize on market growth.

But in a bear market, you may want to switch to heavier investment in value stocks or stocks that are less likely to go up or down but hold a consistent (often relatively low) value over time regardless of what the rest of the market is doing.

Fixed-income securities and other options that help stabilize your portfolio are also good options during bear markets since they act as protective assets even if your other investments start losing value.

While market trends are often highly observable, comparing the transition between a bull vs. bear market can be harder to notice, especially since there are several different long-term markers you should track to be sure what kind of market you’re investing in.

While bull and bear market strategies can be different, it’s also important to remember that bull markets tend to last longer than bear markets and that markets often gain value quickly at the end of bear markets.

Invest in growth during bull markets and look for stable investments in bear markets – but remember that the situation can always change. It’s okay to have some flexibility in your investment planning.

The information presented is not intended to be used as the sole basis of any investment decisions, nor should it be construed as advice designed to meet the investment needs of any particular investor. Nothing provided shall constitute financial, tax, legal, or accounting advice or individually tailored investment advice. This information is for educational purposes only.

The 10 Best Dividend Stocks In December 2022